This is a curious phrase I heard yesterday. What do you suppose the context was? Is rain going to ruin an outdoor event? A picnic, perhaps. Or a sporting event.

How do I know that this question could not refer to that type of situation?

Because it was asked in Jeddah, Saudi Arabia while a noticeably light rain came gently from the sky. A question like that points to one issue and one issue alone: when one lives in the dessert, RAIN is a big, concerning deal!

Let me describe a comparable situation so you’ll begin to understand what rain means in Jeddah. I grew up in PA and lived in upstate New York for many years. I know what snow is. Then I moved to Virginia, I learned that they don’t know what snow is.  The lightest of dustings would cancel all events for the day. Schools would close. Churches would close. Panic would ensue. It was a cultural experience to say the least.

Here’s two snow examples that this northern person couldn’t rap my head around. One early morning in Virginia, we get a call from the school administration to inform us that there will be no school that day because of the snow. Okay. Fine. Morning arrives, there’s no snow. The roads are bare. I mean, dry. Pavement. That is all. And there’s no school because apparently dry pavement is dangerous to drive on. So we, on our day off, drove through the treacherous roads (dry, mind you) to the cinema forty-five minutes away and had a nice family day.

The second anecdote is similar. One early Sunday morning in Virginia, we head off to church – another 45 minute drive (we lived in the boondocks). The roads on the way to church were dry. As in no snow.  (see example above) We arrive at church to find that church was cancelled on the account of snow which didn’t exist. So we went out for breakfast. The restaurant was empty. The non-snow kept everyone away.

Now back to Jeddah. It was the middle of the school day yesterday, and we hear a strange noise in the sky – thunder! Everyone is excited. We peek outside and there is some wetness from the sky. A light sprinkle. I hear a student walk up to a teacher  and with a very concerned voice asks: “Miss, it’s raining. Now what?”

Within an hour of the sprinkles, one hundred kids were picked up by their parents and brought home early. By noon, it was sunny. As in no rain. It was a beautiful day. As the beauty of the day ensued, reports pulled in from many other local schools which indicated that they closed early for the day. Because, I suppose, it was sunny after it sprinkled.

(Now, if I can put aside my snarkiness for a moment, to be fair, Jeddah has no drainage. So if it does rain hard, it can flood quickly. And in Virginia, they don’t understand how to remove snow from the roads. So if it does snow hard, people can be stranded quickly.)

So I’ve learned over the years that weather and culture and location can have a great bearing on a great many things. It can drive a student to the point of questioning how school could possibly continue if a drop of rain is falling from the sky.

NOTE: I’ll leave you with a photo. This is a real photograph – not edited – that shows the downpour of Jeddah. Notice the glistening on the walk. That’s called wetness.) 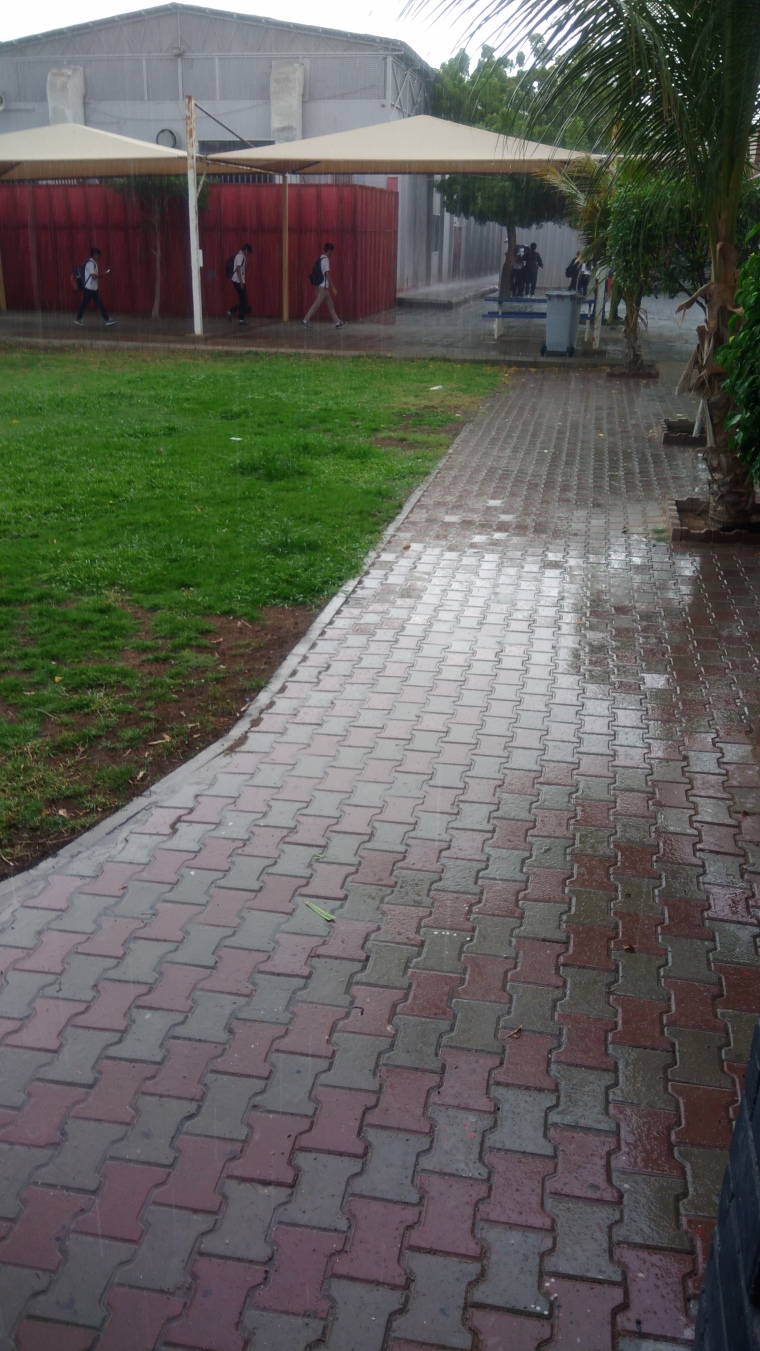