For the past eleven years, my professional dress consisted of sandals, dress shorts, and a button-down, collared shirt with those little slits at the bottom that made it look like it didn’t need to be tucked in. Comfort was the life.

Well, no more. Now, everyday, I’m spiffed up like a Manhattan businessman, minus the jacket.  It was a tragic day when I realized my toes would no longer be free to enjoy the morning air, destined to a daily dark dungeon surrounded by a woven cloth, inside a hard outer shell. If that sounds like my feet are hostage, they are. Literally.

Well, if I had to dress-up, I decided to do it right and bought myself a few nice pairs of shoes. Knowing that mature adults take care of their shoes and do not just force their foot into the heel with a finger used as a wedge. No. I bought a shoehorn. The first one of my life.

I have come to a realization: SHOEHORNS ARE MAGICAL!

Within the course of three blissful seconds, my gargantuan, monstrous morphs into a petite size six for a smooth and effortless slide into my shoe. It’s stupendous. Shoehorn, what spell have you cast upon this land that makes giant plodding steps a mere light jaunt in the park?

Seriously. I had no idea they worked so well. In fact, every engineer in the world should stop what they are doing right now and begin work immediately on a shoehorn for life.

Imagine a device that could movinghorn furniture through a narrow door.

Imagine a device that could shoppinghorn groceries into a bag.

Imagine a device that could learninghorn a college education into your brain with one slick slide.

Imagine a device that could lifehorn your daily routine into a sane and manageable packet.

Why are shoehorns only made for feet? 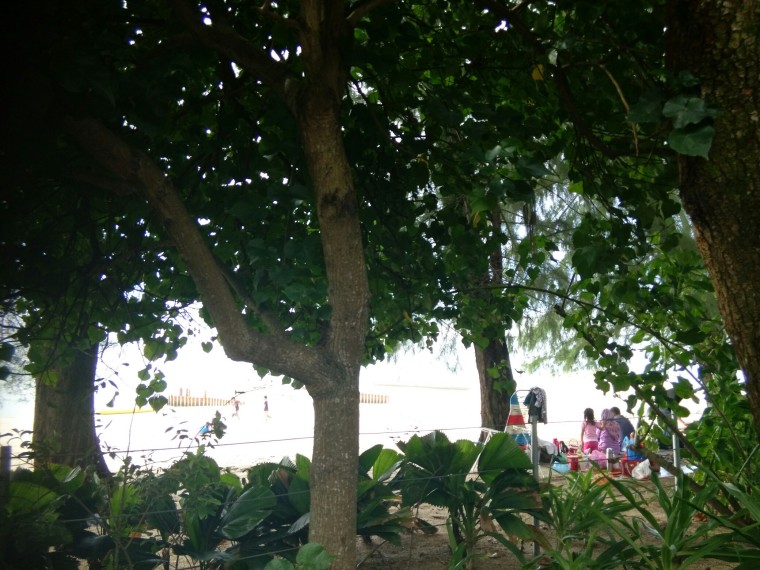 Look closely at this photo. What do you see?

I see memories which will last a lifetime. Not for me, no, but for that family of aunts and uncles and nieces and nephews, mothers and fathers.

if you look closely on the center left, you’ll see two children playing in the sand at the edge of the ocean’s waves. On the right is picnic-central, complete with thermoses, snacks, extra clothing, blankets, mother, father, and daughter. The kids will run back and forth from the water while the parents will chat in the cool of the shade, enjoying the holiday, Malaysia Day 2016.

I took this photo from my usual writing spot, and the scene struck me so vividly that I had to take a photo of it through the trees. It was a lovely scene, the kind my family had when our kids were small. It’s a nostalgic scene, the kind that the Malaysian Normal Rockwell, if he exists, would happily paint and immortalize.

I can imagine what these kids will think in thirty years. Remember when Mom and Dad would pack the car and we would travel over the bridge to Penang Island, weave through the bumper-to-bumper holiday traffic, making the 45 minute ride to Batu Ferringhi where we would picnic by the sea for the entire afternoon, coming home exhausted by midnight? Remember?

Everyone, of course, will remember. And when these young kids have kids of their own, they too will come to Batu in search of the idyllic family day.

A week or two ago I saw this headline: These Celebrities Changed our Lives Forever.

If that’s true, shame on us. But please let this be hyperbole.

I glanced through the “A” list of Hollywood big shots who wouldn’t have even made the “C” list of people who have changed my life forever.

Media has the biggest ego of them all. It’s as if they exist for the people can be happy. It’s as if they speak and we, in a collective gasp, can awaken from our effortless slumber to once again feel alive again.

Well here’s the shocking truth about celebrity: they, those A-listers, need us. We don’t need them.

So let’s be very clear here. Some celebrities may have moved us, but they haven’t changed us. Some actors are remarkably talented, and they have the means to, for an hour or two, delve deep into our hearts and make us think about the larger issues of humanity. But they don’t change us. Two dimensional celebrity figures do not have the power to change us.

But three-dimensional humans do have the capacity to change others.

My wife changed me.

The birth of each of my kids changed me.

My parents changed me.

My pastor changed me.

My friends have changed me.

These are the true celebrities in our lives, not worthy of worship, but worthy of a hearty “thanks” for what they have done for us. How they have molded us, moved us, and forced us to challenge everything we know about ourselves.

So, sorry Hollywood promotion blah-blah blog, I won’t fall for your trap. But I will turn off the TV and spend some more time with the people in my life.

It’s that time of year. I’m putting up the softball backstop once again. Look at this beauty:

That’s one of the best softball backstops in Malaysia. Not much too look at, I know. But the availability of things is limited here – especially when compared to the baseball/softball paradise of America. But you would be mistaken if you thought I missed all that America has to offer. I don’t. In fact, we do just fine here, making do with far less attached to a little creativity.

Let’s start with the backstop in the picture. A couple of the maintenance guys at our school welded that frame together several years back and cemented it into the ground. The netting is made from some leftover, green construction netting which the school had laying around. It’s not pretty. It needs to be replaced every couple years, but it’s cheap (free!), easy to put up and it stops softballs. What else do you want?

I literally can’t relate to the American amateur sports scene anymore. I keep hearing more and more about travel teams, $300 bats, $200 gloves, and $100 cleats. Who can actually afford all that stuff anymore? I predominately played with a tennis ball growing up. I would stand on our front porch and throw the ball against the side wall repeatedly. I never had an aluminum bat growing up. I had a couple wooden bats which were either too small or too big, but that didn’t stop me.

It seems like so many people are obsessed by having to have everything new, expensive, and cool in order to play.

Well, living and coaching in Malaysia shows one very quickly that that’s a big lie. Most kids here who play don’t even have their own gloves. They have team gloves and team bats and team equipment that everyone shares. It’s so difficult to get a team to travel to play in a different region because people simply can’t afford it.

And yet, we play, we learn, we have a lot of fun. Isn’t that what it’s all about? Learn, grow, and pass it on. When amateur sports begins to price out the kids at the bottom of the socio-economic ladder, then something is wrong.

We need to encourage our kids to be creative with less. Learn to use what we have without having to spend more money on an upgrade. Build a backstop out of stuff in your backyard. Got a lathe? Try and make your own bat.

And if you do have three gloves, how about gifting one to someone who can’t afford one?

When we equate success with those having the best stuff and opportunities, then we need to reevaluate and think what can I do to better help those who have less.