You know how it goes: “If someone told me 10 years ago that I would be such and such, I wouldn’t have believed them in a million years.”

I know the feeling. Very well. This notion of unexpected outcomes came to the forefront of my mind this week because I found myself saying that above line nearly verbatim. Mine goes like this:

“In 2002, if someone told me that in fifteen years that I would be a drama teacher in Saudi Arabia, I wouldn’t have believed them in a million years. I would have thought they were experiencing severe mental delusions.”

You see, in 2002, I was living in Vietnam, teaching English at the college level to Vietnamese students studying to be English teachers. I was a frustrated, wannabee, writer who never wrote. I was immersed in Vietnamese culture and language, and I had even contemplated (for a few seconds) going on for a PHD in Vietnamese history. I had never acted in my life. I had never been involved in any drama productions. The extent of my dramatic experiences involved writing a play which I read to my mother when I was twelve, and writing a couple small skits which were performed in some low-key settings. Oh, I did act as Forrest Gump in a skit, so I take that acting bit back.

But I had nothing in my background that would have indicated that I was destined to be a drama teacher.

And I had nothing in my background that indicated that I would ever end up in Saudi Arabia.

So therefore, the combination of those two–teaching drama in Saudi Arabia–would have seemed too implausible to even ponder.

However, as I sit in Jeddah on the heels of my first week of teaching theatre at the American school, I am quite taken back at the loops and rabbit-chasing trails my life has gone down in the past fifteen years in order to arrive at this point. And to think it all happened because that frustrated writer sitting in Vietnam became inspired by a group of students in Malaysia.

I’ve told this story before, but I still like it. I moved to Malaysia in 2006 to teach history. (Yes, that’s a whole different story of how I suddenly switched from English to history!) As the drama director at the school was leaving, I volunteered to start a drama-writing group where I would collaborate with a group of students and we would write and produce a play for the next school year.

That was the genesis of it all. The interesting point in my mind is this: what was the impetus for me wanting to write and produce a drama with students? I don’t actually know the answer to this. It’s something that just popped in my mind, and instead of dismissing it, which I can’t believe I didn’t, I embraced and proposed it to the school. That was the crucial moment. For some reason, I stepped in to try something that I had never tried before. If I had not jumped in at that moment, I am fairly certain I wouldn’t be teaching drama in Saudi Arabia. If I had not jumped in, someone else would have eventually filled the drama void at our school and I would have sat in the audience enjoying the shows, never fully understanding how much I loved theatre.

I know now that I wasn’t meant to observe theatre. I was meant to create it, and I wouldn’t trade it for anything.

The only advice I have as I look back on my journey is that if you get an itch or an urge that you should jump in and try something, don’t delay. You never know where it might lead you. It could make you change careers in mid-stream and send you to far off lands to do things you never would have imagined but now couldn’t ever live without.

Where might you be in 15 years? I hope the answer surprises you.

My favorite Shakespeare troupe, the KL Shakespeare Players, bring back their delightful Shakespeare Demystified series to penangpac starting this Thursday evening. I’ve caught many of their fun renditions over the years, and I’m sure this one will be up to the challenge of presenting the Bard’s  MacBETH in relevant and understandable ways for the modern audience. So anyone in town should definitely make it a point to come support their endeavor. It is, in fact, how Shakespeare is supposed to be experienced – on the stage.

Way back in the day, I was an undergraduate English major. I had the massive Riverside Shakespeare edition which has enough bulk and heft for a government legislative bill. I lugged that thing around, I read all my assigned plays, I discussed them in class, I wrote a billion papers (slight exaggeration) on Shakespeare, and I received a less than satisfactory grade, leaving the class with an under-appreciation for Shakespeare’s bulk of plays.

And it seems to me that most English classes, whether high school or college, still miss the point with Shakespeare. They expect 21st century students to read turn of the 17th century English prose and poetry. I’m sorry, reading Shakespeare is boring, especially if you don’t understand it.

Shakespeare was written for the stage. It is meant to be spoken. Reading drama is an exercise similar to listening to the television. A major part of the experience is missing and along with that comes the flirtations with boredom and the sheer terror of writing a coherent paper that doesn’t rely on Spark Notes.

Stop reading Shakespeare and go watch it (or perform it yourself) instead.

I’ll see you at penangpac later this week.

The main, yearly project for my Intro to Theatre Arts class is our Readers’ Theatre. It’s a performance where the actors keep the scripts in their hands, and they act it out as best as possible with as many props and set pieces as possible. For this project, I make it completely student driven. Inha directed the show this year. Caitlin produced. Each student was assigned to committees such as promotion, props, staging, etc… Caitlin had to learn how to pay royalties. Inha worked daily with the actors on the scenes and their acting skills.

This year we chose to produce “Anne of Green Gables.” I knew this would draw in the female audience of our school. Little girls, eager in anticipation, lined up to watch Anne Shirley walk the ridge pole or coyly brush away Gilbert Blythe. It’s a challenging script for one reason: not much happens in it. It’s really up to the actors to bring the story to life.

And they did it. Just got back from the show and it was a great success. The audience was engaged and receptive and the kids rose to the occasion, and then some. Great performances.

A Readers’ Theatre is a great class project I definitely recommend. Here’s a few photos from dress rehearsal yesterday. 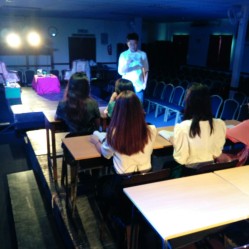 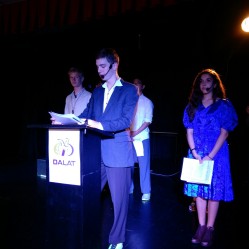 I’m back into full-swing theatre mode. So much of my day revolves around theatre and drama, and, of course, I love all of it. But it is a telling sign of what’s to come. Here’s a quick run-down of all theatre related items I did today.

This was my day – and that doesn’t count my regular job which isn’t related to theatre.

I had a delightfully long drama rehearsal with two young actors this afternoon. We put in a good hour and a half on a nine minute sketch we are working on. As we finished, one of the actors commented how she has to go home and wade through a 13 page biology study guide for a test in the morning.

We all kind of shuddered at the thought, and then I asked, “Wouldn’t it be cool if we could just focus on the arts all the time and forget the other stuff?”

You should have seen their faces light up! Though the one actor clarified that the arts needed to be expanded to include creative writing, and I, of course, wholeheartedly agreed.

Some people just aren’t wired for the hard sciences. I know I’m not. I’m glad other people are or we would still be living as cavemen.

I’ve often thought that perhaps there is a better way to do school for some people – a way where they can thrive, explore, create, and learn to act, perform, do.

I was reading a post a while back from one of my former students and she said how school is crushing creativity. School is pouring useless facts into their heads, and giving them waste-of-time assignments while not allowing them to create and explore areas of interest where they thrive and where they show the most potential.

To a certain degree, I agree. I understand the need to expose everyone to some level of understanding in the various disciplines. But if I can dream for a minute, wouldn’t it be cool to have a performing arts semester for those who are inclined towards such endeavors. Wouldn’t it be amazing to spend day after day, writing, acting, honing skills, creating shows and productions, and then take the group on the road to expose them to the thrills and hardships of the performing arts? Wouldn’t it be amazing for them to learn about expenditures and income by looking at the box office receipts of their particular show? Wouldn’t it be a challenge to see their script and performances critiqued by bloggers and theatre reviewers? Wouldn’t it be invigorating to sit down with a group of professional actors for a week or two and do extended workshops? Wouldn’t it be gratifying to have everyone learn about lighting, sound, and other technical aspects?

Wouldn’t one concentrated semester on the arts change the way they would look at their world?

I do hope that someday this group of talented, creative kids I work with, and the many others around the world, will have a better opportunity to thrive in the arts for a long period of time as part of their schooling. It would be an amazing way to reach a large group of kids through a powerful teaching method.

After all, shouldn’t all learning be practical?