One of my former students – a beautiful person and a beautiful dancer – passed away suddenly this past week. Please keep her grief-stricken family in your prayers.

Her father posted many moving dance video tributes to her amazing grace and talent. Here’s one from a rehearsal of my 2014 show RLT Players present “For All Generations.”  This video features the ever poised and beautiful Thizbe as she rehearses with her partner David Beak for the finale of the show. They are using my voice-over for rehearsal purposes. You can hear me reading the script I had written. In the final show, the actors recited the words live as Thizbe and David danced.

Thank you, Thizbe, for sharing your talent with our theatrical group. You added much! As you are right now in heaven, too.

Last week brought a conclusion to my first show in Saudi Arabia. I was really proud of these kids as they pulled it off in ways I wasn’t sure possible. I have a very young new ensemble with minimal amount of experience and we were doing the type of black box genre that no one was familiar with. But it happened, it worked, I survived, and it was a great starting point for the program. Here are a few photos from our second show courtesy of a colleague. 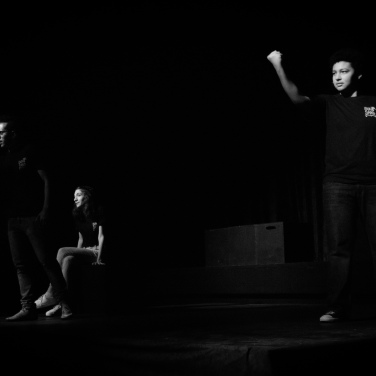 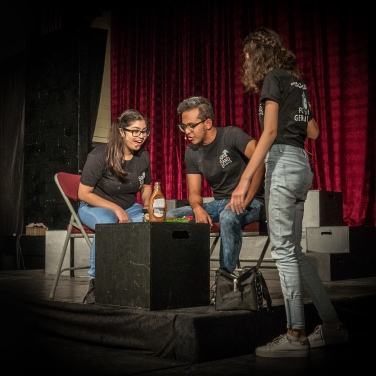 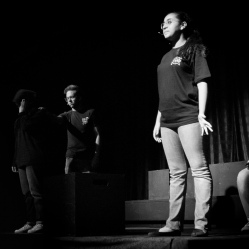 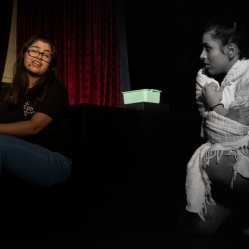 The show was called “For All Generations” – a show I first produced in Penang in 2014. It’s a funny, yet poignant show that has a lot of tender moments. The feedback from the crowd was enthusiastic. The photos going clockwise are: “Jerome, the Malevolent God-King,” “Revenge of the Grandparents” (certainly a favorite), a reprise of the award-winning script “Words to Say at the End of the World,” “What Was It Like?” and my favorite, the kind-hearted  Beatrice who takes in a runaway slave on a cold winter night in 1852 – “If Love is a Crime.”

It’s one thing to write a novel and press the publication button, sending it out into the reader-sphere to be met with an audience of critics.

But it is entirely another thing to sit back at opening night of the play you have written and watch talented young actors bring it to life, to see the delighted faces of the audience, clinging on every work, to see the smiles and laughter, to see the tilted heads and curled-up emotional responses when a poignant scene draws a tear.

As writer and director, I had the privilege of witnessing such a scene last night as my new show “For All Generations” hit the stage for the first time. I was literally exhausted after the show. It’s like it was my heart and my body out on that stage, soaking in the eyes, the smiles and applause.

This beats the release of a novel any day.

I am always curiously interested in audience response because it can rarely be predicted. As an actor stated to me, we become so accustomed to the script that we forget that the audience may even laugh at it when performed, so it is easy to be caught off guard when a long overlooked phrase entices a cacophony of cackles and giggles.

Comedy is great, but I’m especially pleased when the audience connects with a serious piece which makes them cry and think. I saw plenty of that last night.

Overall, it was an amazing opening night, performed by an amazing group of actors. I am so proud of what they accomplished and I can’t wait to see it three more times this weekend.

I’ve finally reached this point. It’s been a long ride. I started writing the script which would eventually become “For All Generations” this past spring. Finished it in the late summer and went straight to rehearsing in mid-August.Three months later we are on the brink of opening night.

Jitters? For sure! I’m never sure who an audience will like a show.

Worried? Of course. Will all the tech work properly? Will all the actors nail the performance? Will enough people come to cover our expenses?

Excited? Very. While I’m nervous, I can’t wait for the audience to see these amazing actors and how they put their heart and soul into the material, adding life and creativity to the script.

When the lights come on and the music starts, everything will be left on the stage. All the laughter, trials, frustrating, and work comes to a culmination. I am sure of one thing, whatever happens, I am extremely proud of this group of 11 actors.

I’m not sure what other schools do for drama, but I do think what we do is fairly unique. I love it, and I hope you do to.

I hope to all who are in Penang this weekend will come out and enjoy this unique show.

Tonight it all begins!!! Break a leg. 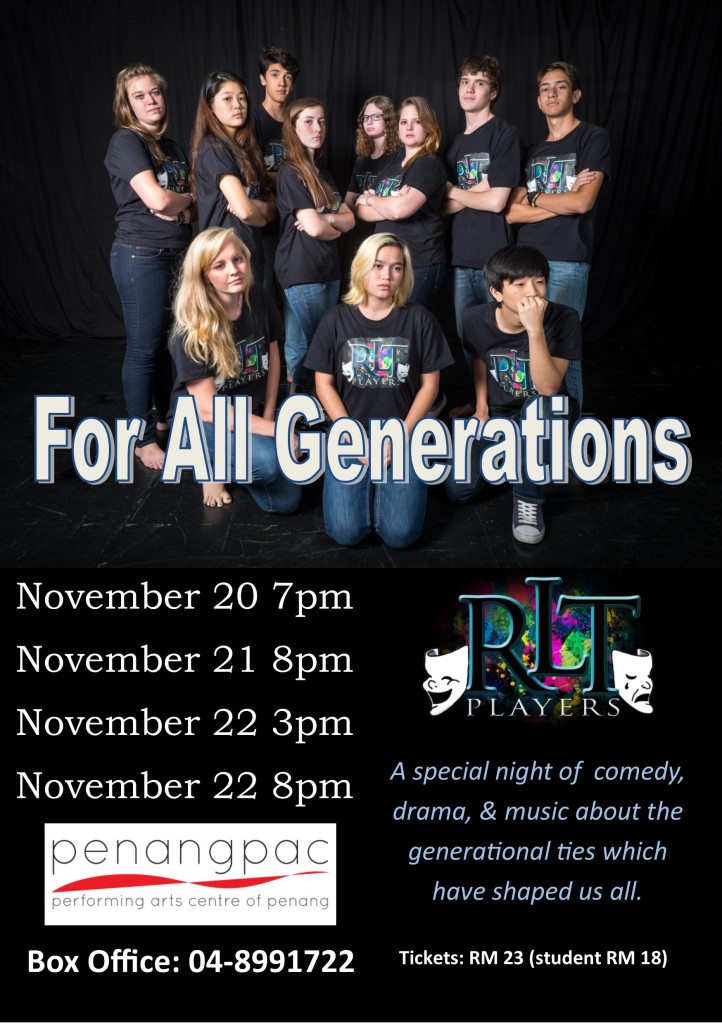 Our stage after many ours of prep work.

Today I organized the read-through for the nine new scripts that I wrote (mainly) this summer which will be produced as a show called “For All Generations.” It will be performed by my lovely and fun drama group called The RLT Players. This is our fourth year to be producing a cohesive work of short plays, centered around a theme. Here’s an overview of the scripts in no particular order:

A Pinch of Fate, A Shot of Destiny – The grim reaper meets his match when Mitch shows up to unexpectedly rescue his next victim. (This one is also being performed as part of the Penang Short & Sweet Festival in early September.

If Love is a Crime, String me up – in 1852, a runaway slave finds herself on the doorstep of a northern lady, who makes great biscuits and has a tender heart

More Heart, Less Attack – Two mothers and two sons, fundamentally misunderstanding one another have a chance to bridge the gap of understanding between them

The Last Princess – When the spoiled princess of evil King Antoine finds out the truth about his barbaric rule, she is determined to end the family’s legacy.

A Woman at War: A Musical – Dedicated to all the women who fought for their love on the homefront. (This will also be part of Short & Sweet KL Musical Festival in September.)

Revenge of the Grandparents – A child, spoiled by her grandpa, has no idea what her parents are plotting to do once the child grows up and has children of her own.

What was it like – A series of questions and statements meant to trigger thought and discussion about understanding the previous generations before it is too late.