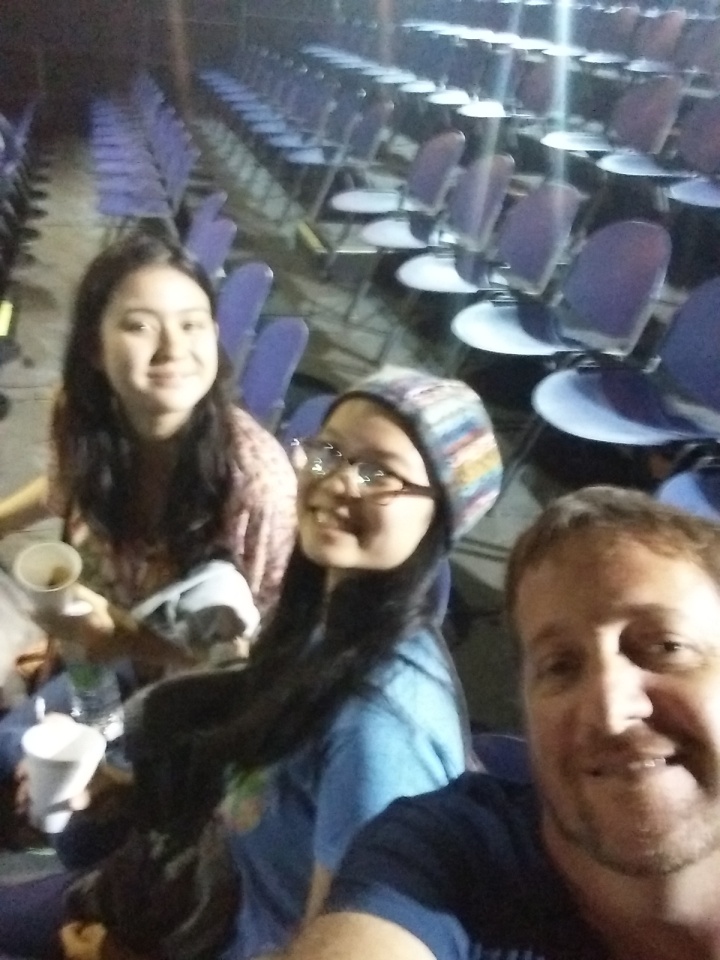 There we are – writer/director with Lexi and Ysabel hanging out at the pre-show meeting last night. We’ve been riding our script for quite a while now. Our short play, “Words to Say at the End of the World” won 5 awards at the festival in August, and it just keeps living on. We had the honor of bringing it to Kuala Lumpur and performing it for the standing room only audience of the Gala Finals Night @ Short & Sweet Malaysia. The girls’ performance was awesome! 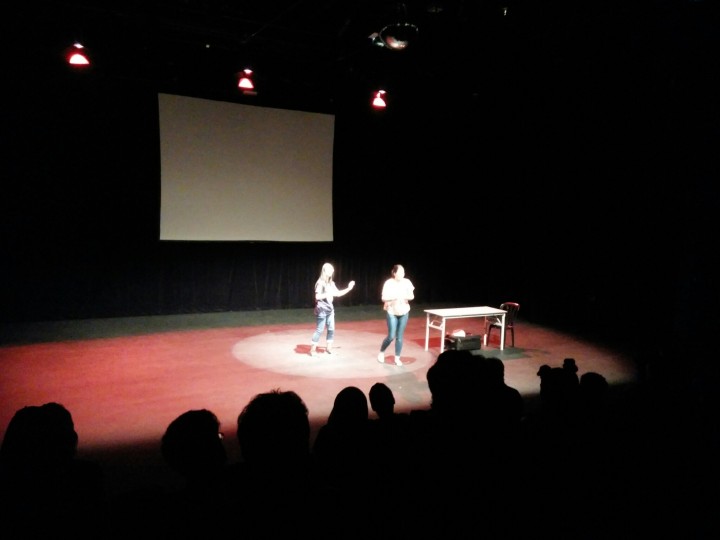 Here they are in their mom & daughter roles. The audience was great! Lots of laughter and many touching tears as the two came to a realization of how much they meant to each other. It’s funny how life suddenly becomes serious when  you’re staring at a mushroom crowd.

Here’s the festivities after the awards-ceremony. (My girls weren’t eligible since it was a showcase piece from another city.)

We have one last performance coming up. They will be giving their final curtain call at the 4th anniversary open day at Penangpac on November 15.

I’m really proud of these girls. They have tremendous talent!

It’s the final weekend of the Short & Sweet Theatre Festival, and one of my new plays entitled “A Writer’s Satire” is being performed by a group of Malaysian actors. Here’s the one sentence synopsis:

A writer is summoned to appear in front of the Industry Review Board – a new government agency which was established to help creative artists become more politically correct.

It’s a (hopefully) funny and engaging look at where (perhaps) our society is heading. Director Henry Tan (whom I’ve never met) I’m sure will be adding his flair and touches to the piece, so I’m excited to see it.  I’m flying down to KL on Friday so I can watch the final two nights of the festival. Then late  Friday night, the best productions of the two weeks of the theatre festival will be announced and will perform one more time on Sunday night as part of the Gala Finals where the awards will be given out. I have no idea if  our show will make it or not, but  here’s  hoping!

However, make it or not, I DO have a show in the Gala Finals. My piece “Words to Say at the End of the World,” which swept 5 major awards at the Penang Short & Sweet Festival in August will be performed by my award-winning students, Ysabel Loh & Lexi Zimbulis. They were invited to bring the piece to KL as a showcase piece for the Gala Finals. Quite the honor! We are very excited to bring this meaningful piece to the packed house in KL.

So I’ll be on scene all weekend at the Festival. I’m sure I’ll have photos  and comments to share.

Until then, time to pack and get ready. Should be a blast!

On the heels of sweeping five awards in the Short and Sweet Theatre festival recently for my short play “Words to Say at the End of the World,” we’re beginning to see that this play isn’t yet ready for retirement. I’ve been asked to have my two amazing actors perform it in three different venues over the next two months. It’s quickly becoming a mini-tour for a mini-play. It’s all very exciting and I’m thrilled to have Yzzy and Lexi get more opportunities to perform this poignant piece a few more times. So I’m proud to announce our mini-tour:

Perhaps we should add a European tour to the schedule. Any corporate sponsors out there that would like to fund up, send me an email!

But seriously, it’s been thrilling to see this play touch a lot of people, and it will be reaching a few hundred more over the next two months. And here are the stars of the show.

Courtesy of Ivan Photography, they beautifully captured the immense talent of my two young actors, Lexi and Yzzy. I’m incredibly proud of both of them. They just have the gift, and they brought my script to life in an amazingly emotional way. Check out this intensity.

Tonight is the last of four performances. It’s been a pleasure to watch them every night.